Plus-Size Mamas Can Breastfeed: Don't Let Weight-Bias, Shaming, and Poor Advice Derail Your Efforts. You've Got This by Kathleen Kendall-Tackett 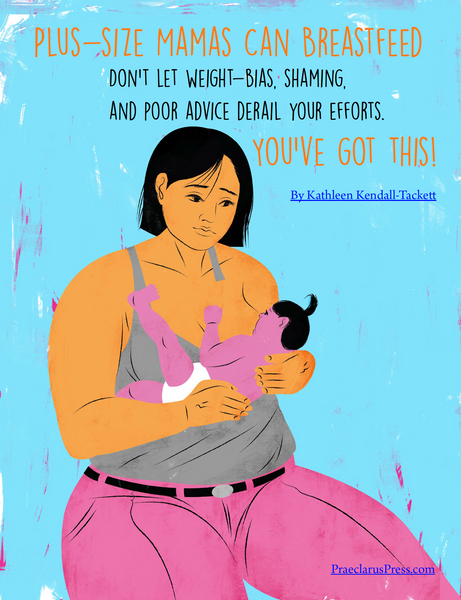 Plus-Size Mamas Can Breastfeed: Don't Let Weight-Bias, Shaming, and Poor Advice Derail Your Efforts. You've Got This by Kathleen Kendall-Tackett

This article is free to share and distribute freely.

Bias against fat people remains the last socially acceptable prejudice. It’s in science, the world, and in healthcare. Plus-size women encounter prejudice in almost every type of health care setting, but for some reason, it seems particularly harsh in maternity care. Women are bullied and shamed into doing things that are not healthy, such as a 15-pound weight gain during their pregnancies or an unnecessary cesarean. What’s worse, many providers feel justified when they act this way, claiming only to be concerned about the mother’s health. When providers say, “It’s just not healthy,” they are often hiding baser feelings that have little to do with the health of the mother and more to do with providers’ sense of aesthetics (“it’s not attractive”), and even their sense of right or wrong (“fat = lazy, undisciplined, poor, dumb, etc.”).

The same thing happens in lactation care. Weight bias is rife. I’ve heard it in the way providers talk about mothers and in conferences on “obese mothers.” Is it any surprise that breastfeeding rates are lower among women with higher BMIs?

A Breastfeeding-Friendly Approach to Postpartum Depression by Kathleen Kendall Tackett

Cannabis and Breastfeeding by Kathleen Kendall-Tackett

Breastfeeding Doesn't Need to Suck: How to Nurture Your Baby and Your Mental Health by Kathleen Kendall-Tackett

Cannabis and Breastfeeding by Kathleen Kendall-Tackett

Free online session-Virtual lactation consulting: How to use Technology and Telemedicine to Continue Supporting Mothers by Lauren Majors.

Recorded Webinar: Protecting the Perinatal Experience in the Time of COVID19 by Leslie Butterfield