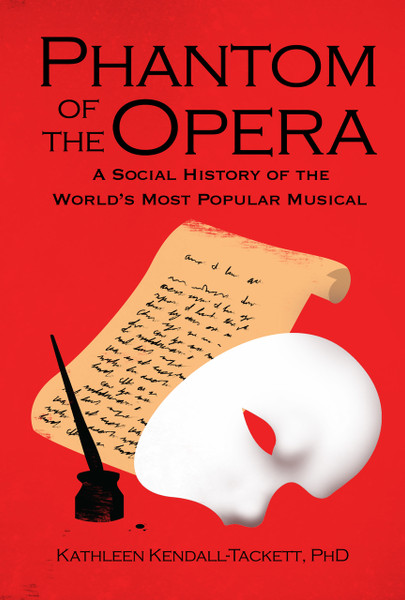 On October 9, 1986, the final curtain came down on the opening night performance of Andrew Lloyd Webber's The Phantom of the Opera. The audience responded with a stunning 10-minute ovation. Clearly, it was a good sign. Lloyd Webber likely had a major hit on his. At the time, however, it's unlikely that anyone knew that Phantom would break every record is theater history and go on to be the longest running musical of all time. Thirty years later, it has won over 70 major theater awards, has been translated into 15 languages, played to audiences in 35 countries, totaling 140 million people, and gross over $6 billion.

The stage show, however, was not what drew Dr. Kathleen Kendall-Tackett to this story. It was what happened next. First, there was a controversial movie version. Then there was an even more controversial sequel. These controversies, and the people behind them, are chronicalled in this social history of Phantom of the Opera. In many cases, the most ardent fans of the original stage show were the fiercest critics of both the movie and the sequel. This story highlights the often challenging relationships between creators and fans, and between the so-called cultural elite and the general public, and how social media has upset that careful balance. This was first apparent in the controversy surrounding the movie, and was especially evident in the three different version of the Phantom sequel, Love Never Dies.

Phantom of the Opera: A Social History of the World's Most Popular Musical features live hyperlinks that allow readers to read the text and see videos of the performances described. These videos also provide insight into the creative process and how that can change over time. An introductory chapter is available for download.

Ultimately, the tale of the Phantom of the Opera is a story of people--the people who made it and those whose lives were touched by it. It is the story of a divorce, celebrated partnership, divorce, and Svengali-like relationship between a composer and gifted young protege. It is the tale of fans so caught up in the original that they would have no other version made. It is the story of the creative process and how it is often iterative. It is also to story of the love-hate relationship between creator and fans, and how that precarious balance shifted in the era of social media.

Phantom of the Opera is great. The social history of Phantom is ever better.

Kathleen Kendall-Tackett is a health psychologist who normally works in the area of women's health. The social history of the Phantom of the Opera is a labor of love, and is her 35th book.

Perspectives In Lactation - Is Private Practice For Me?

A Mother's Climb Out of Darkness

A Breastfeeding-Friendly Approach to Postpartum Depression by Kathleen Kendall Tackett

The Science of Mother-Infant Sleep

Back to Work for the Breastfeeding Mother